99+ Interesting Facts About Lions That Will Amaze You 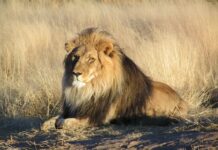 Lions, the most majestic and ferocious creature on the planet, a personality that symbolizes strength, power, and fearsome, and that is the reason they are the “King of the Jungle“.

Once they were the second most spread species after humans, but they are now confined to only Africa and India. The species that once ruled a huge area of Africa and Eurasia has now become a vulnerable creature.
What do we call a group of lions? ​Pride. Were you aware of that? No, right? Well, if you did, then here are some interesting facts about lions you bet you knew. #20 Another interesting fact about lions is that when they acquire a new pride or territory, they make a group of 3 to 4 male lions and attack the resident male lion till death and will also kill his cubs. Finally, we have come to the end of interesting facts about lions list. Lions have always been a heritage to the world, and they have withheld a long list of interesting facts within them. It was just a piece of some unknown facts from the life of the “king of the jungle”. Their life is very different from what it appears.