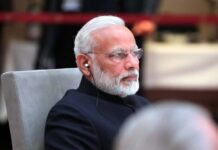 Narendra Modi is a prominent and well-known name in India as this name belongs to one of the greatest Indian politicians. Since 2014 Narendra Modi has been regulating as the current Prime Minister of India. Then he was given the name “Namo” by the Indian people or followers which is again the short form of Narendra Modi. He is one of the mind-blowing personalities of India which has blown the nation with his service. Do you want to know some exciting facts about Narendra Modi? Okay! I know you are waiting to know about his personal life and his entire lifestyle! How does he maintain his leadership? What is his aim as a PM?  Isn’t it?  Let’s know more interesting things in detail.

Who is Narendra Modi?

How old is Narendra Modi?

Narendra Modi is 70 years old as he was born on the 17th of September 1950 to a Gujarati family at Vadnagar. He is the son of late Mulchand DamodarDas Modi and Hiraben Modi. Narendra Modi has six siblings including him who is the third eldest among others. In his early childhood, he used to sell tea with his father at Vadnagar Railway Station and later he started running his own tea stall at bus terminus with his brother.

Do you know where does Narendra Modi lives? How does Narendra Modi get in politics?

This is one of the interesting facts about Narendra Modi where he gets into politics. After completion of his M.A degree in Political Science which he did from Gujarat University in Ahmedabad. Then Narendra Modi enrolled in an organisation called RSS which is known as Rashtriya Swayamsevak Sangh party in the 1970s. Narendra Modi rose himself steadily in the RSS structure and his coalition with the party relatively aided his political career.

What is the salary of Prime Minister Narendra Modi?

When it comes to salary everybody gets inquisitive especially if it’s about our PM Narendra Modi. He receives Rs 20 lakh annually including Rs 960,000 as a PM salary. This is also one of the facts about PM Narendra Modi which most of the people do not know but keen to know such facts.

Do you know where does Narendra Modi lives? Narendra Modi lives in 7, Lok Kalyan Marg which is the official Prime Minister residence of India that is situated in Lok Kalyan Marg, New Delhi. Lok Kalyan Marg was built in the 1980s. Do you know, the Prime house is constructed in 12 acres. The whole area is a no-fly zone

What did PM Narendra Modi do for our country?

He has been doing an outstanding undertaking with his remarkable performance or achievement. Due to his amazing service, Narendra Modi is considered as the greatly influential man in the past record of politicians. He has established himself to stand-in the man of his words.

Let’s discuss further facts about Narendra Modi related to his authorization or service.

Narendra Modi did a tremendous job in empowering India by encouraging three words that are “Make In India” which he declared at the Red Fort to wake up the potential of the nation. Due to Narendra Modi, India became the manufacturing junction of the globe which has given life to different 25 sectors. PM Narendra Modi allowed foreign investment for enhancing the sectors and developed various campaigns like Digital India, Skill India and others which made India a great start-up gestation centre in the globe. Due to Narendra Modi in the government, farmers are empowered which is the facts about Narendra Modi. He also focused on developing the agriculture sector by encouraging farmers for safeguard and higher productivity and also by boosting their incomes and improving farmers overall good living standard. PM Narendra Modi started several campaigns for agricultural development by providing seeds and fertilizers, enriching irrigation facilities, simple way to credit, advanced techniques and genuine price for their production.

Another fact about Narendra Modi is that he developed another campaign called “Swachh Bharat Abhiyan” focussing on cleanliness and Mahatma Gandhi’s dream which Narendra Modi said at New Delhi, Rajpath in 2014 that “clean India would be a great tribute that we Indian can pay to Mahatma Gandhi on his 150th birth anniversary. It was one of Narendra Modi’s successful campaigns where he got appreciation from all his supporters.

Everyone should know is that he played an incredible role in developing a campaign named ” Beti Bachao, Beti Padhao” where he motivates saving the girl child and educating them. PM Narendra Modi promoted this campaign With the help of three ministries including Family and Health Welfare, Child and Women Development and Human Management Development where their mission was to empower women and girl children working on their issues by developing their perspective through training.

PM Narendra Modi emphasized in empowering various states by encouraging federalism where he focussed in the development of every state equally. Narendra Modi helped in reinforcing and growing the states by maintaining a good brotherly relationship between the states and centre.

PM Narendra Modi is intelligent in his own manner to empower and expand India’s collection of diplomats. It is PM Narendra Modi who believed in maintaining a relationship with his neighbour countries and did pretty well who got appreciation not only from India but from another country as well with his smartness and intelligence which is an amazing fact about Narendra Modi.

Last, the above-mentioned facts about Narendra Modi are not enough to know him better. Narendra Modi has done numerous other things to develop his nation and he is still doing with his all heart. PM Narendra Modi is considered a great personality in India where he inspires all Indians to grow with his aims like “Make In India” and many others.