9 Cane Toads Australia Facts You Should Know About 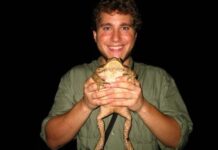 Do you know when and for whom the cane toad was brought to Australia? Although it seemed like a very good idea at first. But the beetles sit on top of the sugar cane, due to which the toads do not reach them. Because the cane toads Australia are very heavy. But in today’s day, you cannot imagine how many will be there. Is it not the Amazing cane toad fact.

Do you know how many toads in Australia now?

You would not believe that there are more than 200 million cane toads in Australia today. You must be wondering how many cane toads came to Australia in such a short time? Because the female cane toad can lay 30,000 to 50,000 eggs at a time and they lay eggs twice in a year. And because of which they are covering 50 KM every year. There is a film “film Cane Toads: An Unnatural History” to document the trials and tribulations of the introduction of cane toads in Australia.

Do you know how dangerous cane-toads are?

It is so poisonous that if someone eats them from eggs to adult stage, to paralysis, convulsions, excessive salivation, or even death. Because there is a large swelling called parotide glands on each shoulder behind their ears. This is where they carry their milky white toxin (bufotoxin). Their skin and other glands on their back are also toxic. Due to their increasing population, the native animals of Australia are in a lot of trouble. Do you know how strong toads are?

The habitat of cane toads can be rainforests, coastal mangroves, sand dunes, shrubs, and woodlands. They do not require much water for breeding. They can also survive temperatures between 5 ° C – 40 ° C, so you can easily see them even the cold winter weather of South Australia.

How WWF-Australia is helping Australia’s native animals to protect them from the cane toad invasion?

we can’t stop the cane toad invasion in Australia, we can help native species survive them. In partnership with the WWF-Australia, Cane Toad Coalition are working to train native predators to recognize Cane toads and avoid the taste of cane toads. It’s called taste aversion training. It’s a bit like getting food poisoning at a restaurant and never going back there. They are leaving small cane toads in important habitats, native hunters find small amounts of venom that make them sick but cannot kill them. Because of which new predators search cane toad and eat them. In the end, the cane-toads had already devastated Queensland and are now killing the animals around there as well. Whoever comes in their way, they also destroy them. Because of which animals have become difficult to live in Australia and within a few years they will reach the Western Australian coast.

If you like this article on amazing facts about cane toads, Please share and if you have some suggestions, please give it in the comment box below.