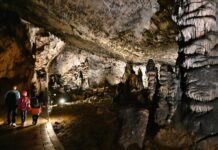 Krubera Cave is the deepest cave in the world that we know so far, but there may be more caves that we do not know about yet. This cave is also called Voronya Cave by another name. It is located in the Gagra Range of the Western Caucasus, an isolated region of the Arabica Massif Georgia. The discovery has reached so far that the existence of the cave is known. Let’s start with amazing facts about Krubera Cave. You might want to know why this cave is named Krubera Cave.

#1 When a group of people entered the cave for the first time in 1960, they saw nests of thousands of crows, due to which the cave was named Krubera Cave. The name “Krubera” was given by the Soviet linguists who made the discovery. The meaning of this Krubera cave is “Crow’s Cave”. Most Amazing Facts about Krubera Cave #5 Gennady Samokhin was a Ukrainian cave diver who reached the deepest point of Krubera Cave. Speleologists were there to find out why the design of this cave is different and what is the source of the water. They were trying to uncover more and more secrets about the Earth. Do not know what are the secrets hidden inside the earth that can change our future. Even today it is completely secret that how this Krubera cave was formed, how deep is it and what is its end point?

If you like these amazing facts about Krubera Cave, please do let us know in the comment box below and which one is your favorite. If we have forgotten any important information, please let us know.